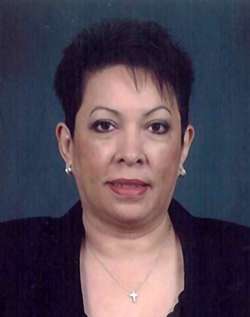 Dr. Briseida De Leon Northrup is a bilingual audiologist and faculty associate at Callier Center for Communicative Disorders at the University of Texas in Dallas. Dr. Northrup has spent over 30 years bridging cultural and educational audiology opportunities within the Americas, focusing much of her career on meeting the audiological needs of the underserved Spanish language population in the United States and Americas. In Texas, she fought for decades to obtain special funding and resources for children who have hearing loss, but cannot afford amplification. She has led numerous trips to her native Panama to fit hearing aids on children, and recruited American otolaryngologists to travel with her on a some cochlear implant missions. Many hearing-impaired children in Panama have benefitted from her unfailing commitment to bring audioloigical services to Panama.

In addition, she has shared her audiology knowledge to educate local service providers. Her work has made a major impact on hearing health care practices in Panama. Dr. Northrup was the first chair of the American Academy of Audiology Diversity and International Exchange Committee and during her tenure initiated and coordinated the “Global Village,” a program developed to translate audiological terms from English to both Spanish and Portuguese; material that is still in use today. In 2008-2009, Dr. Northrup’s efforts in the Spanish language community earned her the honor of being elected president of the Pan American Society of Audiology (PASA). As president of PASA, she has connected colleagues from Central and South America with leaders in audiology from North America and Europe. Dr. Northrup has visited numerous universities and professional organizations in many countries, and has been instrumental in their development and production of exchange materials.

Dr. Northrup’s Humanitarian effort emphasizes education and global citizenship to make audiology and audiologists to strive for excellence, and to do so in countries where resources are limited. She has consistently promoted global outreach training programs to better serve the needs of those with hearing loss. Her goal has not only been to provide direct service to individuals in need, but to also coordinate an infrastructure of local professionals who remain prepared to diagnosis and rehabilitate people with hearing loss. Dr. Northrup has devoted her life to underserved hearing impaired children around the world, dedicating countless hours toward the international development of audiology. Clearly she is deserving of the Academy’s Humanitarian Award.