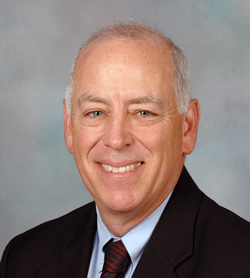 Christened with the initials “DB,” David B. Hawkins was likely destined from birth to a professional career devoted to audiology. If true, then the profession is certainly far better off today as a result. Dr. Hawkins has been one of those rare individuals who could function just as easily in the research laboratory, the classroom, or the clinic. Importantly, throughout his career he has demonstrated that he not only functioned in each of these capacities, but has excelled in each. The early portions of Dr. Hawkins’ career were spent in academia, with a greater emphasis on teaching and research, but never to the exclusion of his interests in clinical audiology. In fact, a hallmark of the first 15-20 years of Dr. Hawkins’ career is the application of good science and research skills to clinical issues confronting audiology, especially in the area of amplification.

During this portion of his career, Dr. Hawkins made seminal contributions to at least four areas involving amplification: (1) the critical importance of measuring loudness discomfort levels and using these measurements to optimize the maximum output of hearing aids; (2) the benefits and limitations of directional microphones in hearing aids, a topic of renewed interest in the field in more recent times; (3) associations between various measures of hearing-aid gain, including pioneering work with real-ear insertion gain; and (4) means of evaluating FM systems. This work has stood the test of time. For example, those measuring loudness discomfort levels in the clinic and in the research laboratory today most often use the methods developed by Dr. Hawkins and refer to these frequently as having been obtained using “the Hawkins method.”

His pioneering work in the evaluation of hearing aids with directional microphones was instrumental in tempering the exuberant enthusiasm regarding the benefits of this technology when it was published in the 1980s (and for which he received the Editor’s Award for the article of highest merit published that year in the Journal of Speech and Hearing Disorders), and has re-surfaced again in recent years as the field began to evaluate this technology anew.

During the past 15 years of Dr. Hawkins’ career, while serving as the head of the Audiology Section and the director of the Hearing Aid Clinic at Mayo Clinic Florida in Jacksonville, Florida, greater emphasis has been placed on clinical audiology, but never to the exclusion of his interests in research and teaching. Hallmarks of this more recent period include many presentations and publications on professional ethics, amplification, diagnostic audiology, and group approaches to aural rehabilitation.

Of course, not only has the profession benefited greatly from Dr. Hawkins’ three decades of contributions, but countless patients with whom he has worked throughout his career have also benefited greatly from his services as a master clinician. Perhaps the only thing surpassing his many accomplishments in research, teaching, and clinical service is his great humility about his many outstanding and important contributions to audiology.