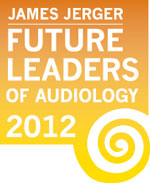 JFLAC 2012 was an amazing opportunity to grow and learn as an audiologist faculty member. I am so thankful for your time and great efforts to put this wonderful conference together. I will certainly be doing more for my profession from this point forward because this conference was truly an "eye opener" for me.

The James Jerger Future Leaders of Audiology Conference (JFLAC) 2012 took place from September 13–15 at the Reston, VA, office of the American Academy of Audiology. Eighteen mid-career audiologists were selected by the JFLAC committee using a competitive peer-review process that included five essays on contemporary issues as well as two letters of reference.

On Thursday, September 13, the program started off with a "meet and greet" luncheon attended by "JFLACers," Academy leadership, senior staff, and program supporters. After a warm welcome from Therese Walden, JFLAC program co-chair, Siemens Hearing Instruments (JFLAC Platinum Underwriter), and The Oticon Foundation (JFLAC Silver Underwriter) were recognized for the generous contributions to the AAA Foundation that funded the conference.

Following the luncheon, Academy President Deb Carlson initiated a video call Q&A with the Academy's first president and founder, Dr. James Jerger. The Academy's Executive Director, Cheryl Kreider Carey, then introduced the attendees to the operational side of the Academy with an overview of the responsibilities and duties of the respective departments at the Academy's national office.

After a brief tour of the headquarters, JFLAC co-chair, Carmen Brewer, introduced the JFLACers to their leadership project during a working dinner. The leadership project experience started before the conference with the attendees being assigned to groups to research contemporary audiology-related topics/issues and the task to develop discussion points and solutions to those issues. The leadership project culminated on September 15, Saturday afternoon, with a presentation by each group to the four "shark tank" panel members: JFLAC co-chairs, Therese Walden and Carmen Brewer; Academy Executive Director, Cheryl Kreider Carey; and Deputy Executive Director, Ed Sullivan.

On the second day of the conference, Past Presidents Brad Stach and Gail Whitelaw shared their perspectives on the history of the Academy (Stach) and leadership theories (Whitelaw). Dr. Walden then discussed contemporary issues that are impacting the Academy and the profession of audiology. Following a working lunch where the Academy's A4, composed of the Academy's Foundation (AAAF), the American Board of Audiology (ABA), the Student Academy of Audiology (SAA) and the Accreditation Commission on Audiology Education (ACAE) provided an overview and update of their respective organizations.

Dr. Joe Thomas, (program faculty, Leadership Education and Development Program – LEAD, United States Naval Academy), provided historical insights on ethics in leadership. The attendees wrapped up the day with a trip to the Academy's Capitol Hill Office (CHO) in Washington, DC, which is located just a few blocks from the Senate side of the Capitol. At the CHO, the Academy's Director of Government Relations, Melissa Sinden, and John Williams (Academy lobbyist with The Federal Group) provided a session on advocacy and lobbying. Comments by the attendees indicated that this session provided new and important information in this area and also provided some myth-busting with regard to advocacy and lobbying practices.

On Saturday, Jeffrey Cufaude (Idea Architects) was invited back for his third JFLAC experience to facilitate conversations on the topics of time management and the DiSC profile (attendees completed this prior to coming to the meeting). During a second working lunch, Ms. Carey and Mr. Sullivan provided an overview of association governance and the working relationship between the Academy's volunteer leadership, the members of the Academy, and the professional association management staff.

At the closing banquet on Saturday evening, each JFLAC attendee was presented with a Certificate of Appreciation and JFLACers expressed their commitment to make gifts to both the Academy PAC and the AAA Foundation. Further, each attendee completed a volunteer application for a future appointment to an Academy committee or working group. The next JFLAC will occur in 2014! Click on the thumbnail images to see JFLAC in action.

JFLAC 2012 is funded by the American Academy of Audiology Foundation with grants from Siemens Hearing Instruments and The Oticon Foundation. The Academy thanks its philanthropic partners for their generous support.